"I'm afraid I disagree with you" - or, How to disagree in English?


I’m afraid I disagree with you. 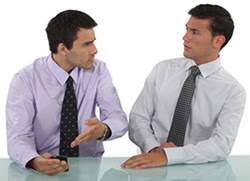 Last week we looked at the ‘softeners’ (polite words and phrases) that people use to make requests sound nicer. This week we’re taking a look at the sort of phrases that people use when they are disagreeing with people and they don’t want to sound rude or express opinions that sound too strong.
The statement, ‘I disagree with you.’ sounds very strong in English and people often choose not to use it. However, if people do want to express strong disagreement and they use this phrase, they often ‘soften’ it slightly by first apologising:

Another way of slightly softening the statement ‘I disagree with you.’ is to introduce it with ‘I have to say’:

I have to say, I disagree with you, James.

Very often, though, people prefer to use phrases that are less strong when they are disagreeing with statements. A very common way of doing this is to use the phrase ‘I’m not sure…’ or another phrase with a similar meaning:

Statements such as these usually mean, ‘I don’t agree.’ even though they seem to be saying something less certain. They are generally just a gentler way of saying it.

In a similar way, people may disagree with a statement by seeming to ask a question. Again, this is a slightly ‘softer’ way of disagreeing:

Statement: In any case, women are better at these sorts of tasks than men.
Reply: Is that really true? In my experience, men are just as good.
Response: Is that always the case? I know plenty of men who are just as good as women.
Response: Do you think so? I’m not so sure that’s the case.

A third way of ‘softening’ disagreement is by first saying that you understand what someone is saying, or that you accept that part of what they are saying is true. You may then go on to say exactly what it is that you disagree with:

Of course, you are free to disagree in any way that you choose, but if you want to make sure that you don’t sound too direct or rude, here are a few useful hints.

About these ads
Posted by Vu Thi Phuong Anh at 4:24 AM